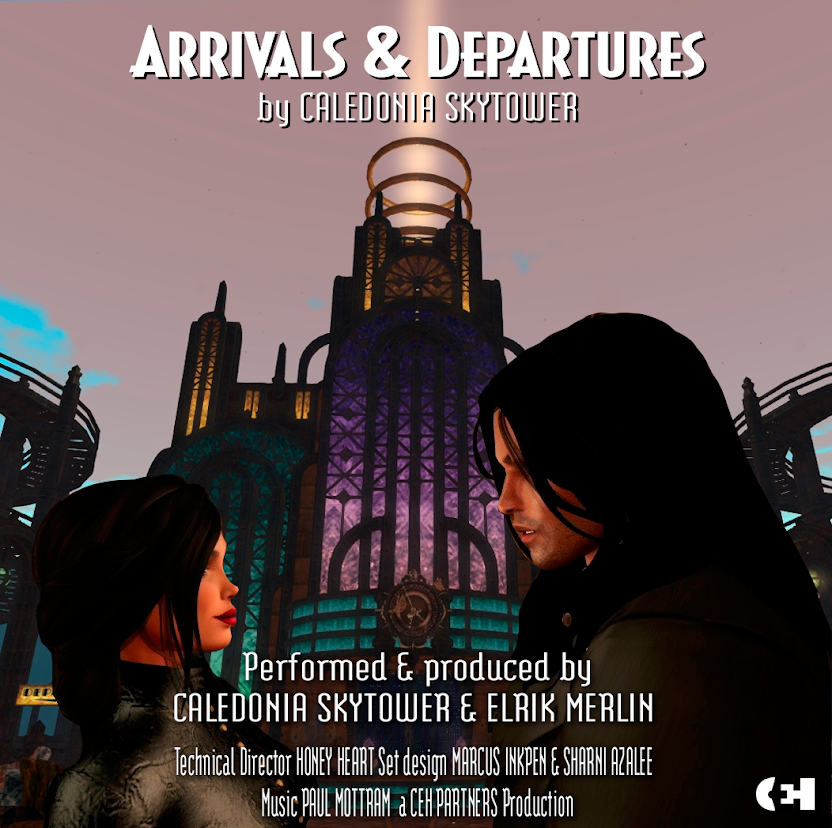 Arrivals & Departures is a new machinima from CEH Productions – Caledonia Skytower of the Seanchai Library, Elrik Merlin of Radio Riel and Designing Worlds, and Honey Heart of Elite Equestrian. The 15-minute film, shot in Second Life, is based on a short story written by Caledonia as part of the Fantasy Faire LitFest Tour (at the 10th Fantasy Faire, the annual SL-based fund-raiser for the American Cancer Society), and originally recorded for Fantasy Faire Radio.

Arrivals & Departures presents a glimpse into two individual journeys that are brought together and shared for the last time. It is about the one who leaves, the one left behind, and the essential role of each. Though the word is never uttered in the film, it essentially addresses aspects of our attitude to death.

“He has accepted the journey on which he must now embark,” says real-life professional storyteller and theatrical designer Caledonia Skytower. “His last act is to pass along that which has been most important in his life to someone who is remaining behind – requesting their commitment to carry on the work.”

“She is dropped without warning into loss, grief, and accepting his legacy with no warning or time to become accustomed to its inevitability. She must choose to be present for him in this moment, accept the commitment with which he tasks her, and be prepared to continue on – while at the same time dealing with the shock and weight of it.”

Arrivals & Departures also highlights the vital importance of storytelling, harking back to an earlier time when tales were woven into a verbal tradition that was handed down by word of mouth from one generation to the next.

The story was inspired by, and performed in, Erstwhile, a superbly-imagined Steampunk-inspired spaceport created by leading virtual world creators The Looking Glass – Sharni Azalee and Marcus Inkpen – for Fantasy Faire 2018. At the end of the event, the region in its entirety was put up for auction in aid of the special project supported by Fantasy Faire and Relay for Life, the construction of a Hope Lodge in Kenya. You can read more about the project here. It was (after bidding) purchased by Carmella Santana, who, upon learning of the plan to create the machinima, generously loaned the entire build to CEH productions, and it was reconstructed as a film set on an Elite Equestrian region with the help of Marcus and Sharni.

The story was originally written for the LitFest Tour at Fantasy Faire, a special event that included a daily visit to each one of the Fantasy Faire regions in turn, offering inspirations for stories and poems to those taking part. You can read the original version of Arrivals & Departures here (on the page for Erstwhile). Other stories for the other regions can be found here – many of these will be broadcast by Fantasy Faire Radio.

Arrivals and Departures is actually one of a number of Tales written by Caledonia in celebration of friends of hers who have been lost to cancer. You can explore them all (and other stories and poems too) through the LitFest Tour pages for the individual regions.

For the machinima, Technical Director Honey Heart re-erected the spaceport as a film set, and used a range of in-world animations and path-scripting techniques to realise the action, which was shot by Caledonia and Elrik, who also performed the two lead roles. The footage was then edited conventionally by Elrik.

The project was a transatlantic collaboration, with Caledonia in Washington State, Honey in Michigan and Elrik in Scotland. The soundtrack recording and production co-ordination was carried out in Skype, sharing screens while shooting, and ‘dailies’ were viewed via the cloud.

Arrivals and Departures is available on YouTube, Vimeo, SLArtist.com and AviewTV.