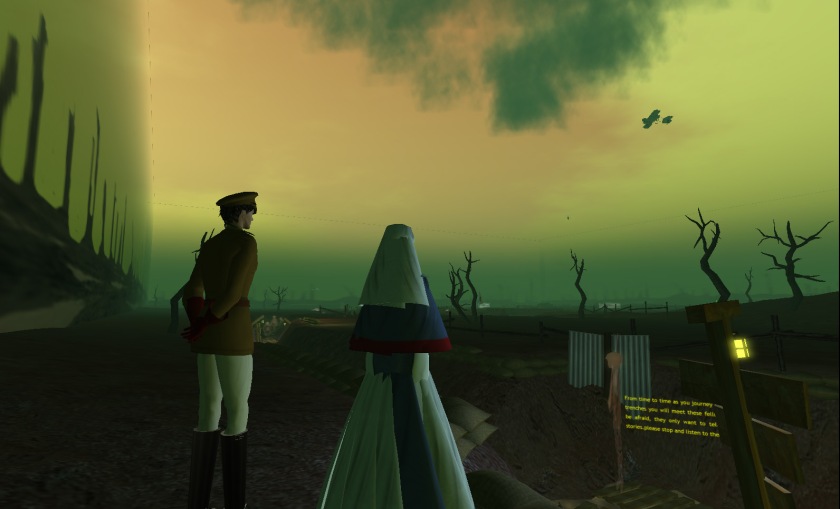 November 11th marked the 100th anniversary of the signing of the Armistice that brought the First World War to an end. Signed at the eleven hour of the eleventh day, the Armistice silenced the guns that had killed so many over the four years of the War. On November 11th, 2018, Designing Worlds released a special short film to mark the occasion at 11.10am UK time. This film is still available.

Please join us at our usual showtime of 2pm SLT on Monday 12th November, when we will be hosting a showing of the film Remembrance: 1918-2018 in the Designing Worlds studio on Garden of Dreams, followed by the show we made for the opening of the 1st World War Digital Poetry Archive at Frideswide in 2009.

The exhibition simulates aspects of life in the trenches on the Western Front during the 1914-1918 war and presents work by the “War Poets” of the period. As visitors explore the simulation, they can listen to the voices of veterans recounting their experiences of the war, view original film footage and photographs from the time, and learn about life on the Western Front, encountering some of the most powerful poetry in English literature by seeing the original manuscripts, and turning the pages of the poets’ war diaries and letters.

This is a combination of deeply moving films – don’t miss our special viewing party.

If you can’t attend in person – tune in to the web at 2pm SLT on Monday for a showing on SLartist – or catch it later in the week on the SLArtist.com channel – or on the Prim Perfect or Designing Worlds blogs.

You can also see the special film of the song that concludes the show – “Only Remembered”, recorded by leading British folk musicians Coope Boyes & Simpson providing the music in their unique and moving acapella style, as we view aspects of the unique exhibition by the University of Oxford’s First World War Poetry Digital Archive.

DW064A – Only Remembered (from Designing Worlds episode 64, The Western Front) from Richard Elen on Vimeo.

“Only Remembered” (Bonar/Sankey/Tams Voice Publishing) is used by permission and is taken from the album “Private Peaceful – The Concert” (No Masters NMCD24, nomasters.co.uk) by Coope Boyes & Simpson (coopeboyesandsimpson.co.uk) The song – originally a Horatius Bonar / Ira Sankey hymn from the 19th century, arranged by John Tams – also appears in the play “War Horse”, adapted by Nick Stafford from the book by Michael Morpurgo.

If you can’t attend in person – tune in to the web at 2pm SLT on Monday for a showing on Vimeo – or catch it later in the week on the SLArtist.com channel – or on the Prim Perfect or Designing Worlds blogs.